Energy company shows off its work 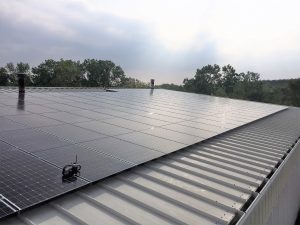 TIPP CITY— Technological improvements incorporated at the Shelby County Recycling Center this year gave a Tipp City renewable energy company an opportunity to shine light on its offerings close to its own backyard.

The array is estimated to produce one-half the energy the facility will use.

The modules are monitored to see what each is producing at any time.

That information can be seen at: www.ogwenergyresources.com/shelby-county-recycling-plant

“The solar array works to help reduce the operating expense, the utility costs,” he said.

The project was funded in part with a $70,067 grant from the Ohio Environmental Protection Agency.

Over the past few years, the facility was upgraded to highlight automation.

“This was the last piece of the puzzle, to have this electrical system expected to power, produce at least one half of the facility needs,” he said.

Significant savings are expected with the summer sun with a drop during other months, Skora said.

OGW analyzed the facility’s structure and its electric bills as part of developing a quote to design the effectiveness of the specified solar array, Davis said. The system went live May 23.

The Shelby County recycling center has been recycling waste for 25 years.

The system will provide the equivalent of recycling more than 13 tons of waste a year at the center, Davis said.

“This is probably the most technically advanced small recycling operation in the multistate area,” Skora said.

An open house was held at the facility in July with representatives from the Ohio EPA, Mitsubishi Electric, GT Environmental along with local county commissioners and representatives of congressional and senate offices.