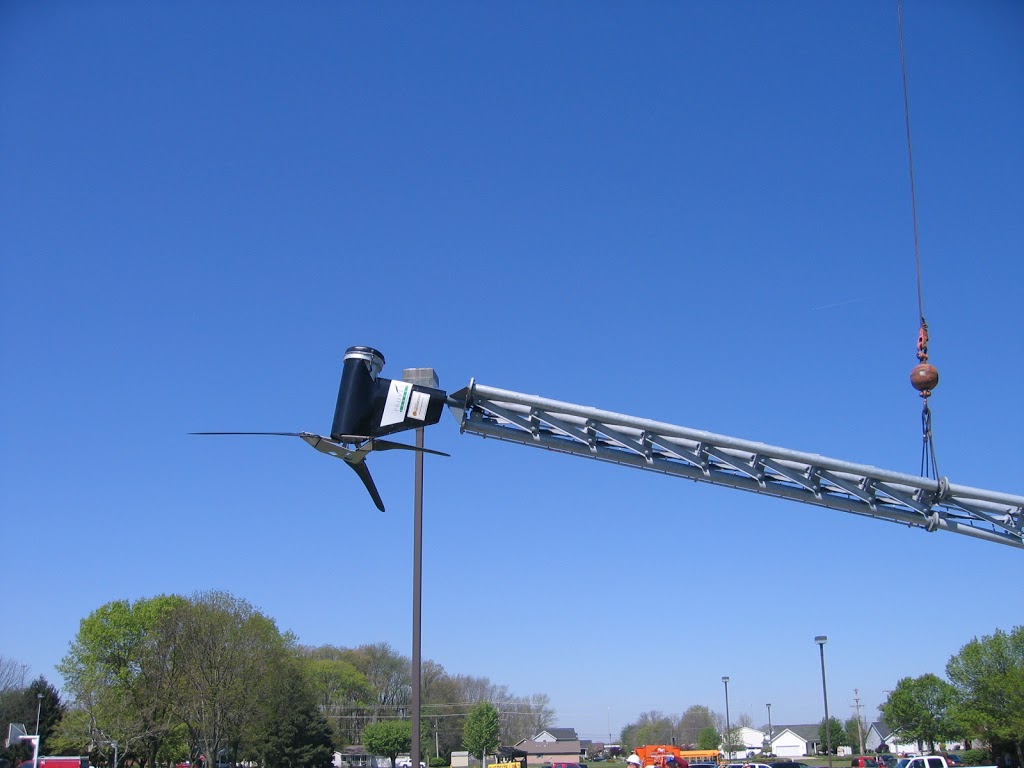 PIQUA – The skyline of Miami County looks a little different today. A 100-foot tower weighing more than 4 tons was erected behind the adult division building at the Upper Valley JVS on Wednesday.

The tower was supposed to go up on March 10, but the project hit a snag. The spigot was too short by a couple of inches and had to go back to the manufacturer in Shelby, Ohio. This second attempt proved to be seamless as staff and students at the UVJVS looked on.

“I feel great. It looks like installation went very well. There was a lot of coordination between partners. We’re very appreciative of our partners and we hope it will be a real learning experience for the community.” said Art Bowser, industrial engineering coordinator.

These partners include the general contractor for the project Ohio Green Wind of Tipp City, Piqua Steel Co. and North American Tower Erectors. According to Raymond Davis, President of Ohio Green Wind, the company will use the UVJVS as a dealer training facility.

The company sells products to dealers and installers. Six manufacturers of the products have committed to training the company’s dealers in conjunction with Ohio Green Wind which has dealers in 14 states. These dealers and manufacturers will travel to the area and stay for two to three days. Davis sees another benefit to the UVJVS being a training facility. “Who better for our dealers to hire than people who have been trained on the same equipment?” he said. The turbine is part of the school’s alternative energy and green systems management program in adult education.

After all the components of the program are in place, the school will have the wind turbine, solar panels, a fuel cell and a solar thermal unit donated by Ohio Green Wind. Wires and conduit will run the current generated from the turbine to an inverter located in a lab in the adult building. “We would like to think students coming out of the JVS would have an advantage to hire because the dealers are trained on the same equipment as the students,” Davis said. Work has begun on the solar panel facility as well. The high school construction students created a foundation and built a roof for the solar panels which soon will be installed by the adult students.

The JVS turbine is equipped with a vibration monitoring system. According to Paul Wren, primary instructor for the alternative energy program, this is the first time the system has been employed in the world. The JVS will be used as a beta site and vibration and noise analysis will be done. The information will be used to help improve turbines around the world.